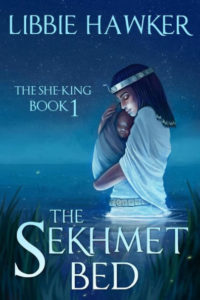 For August, the RCG book group reads and discusses “The Sekhmet Bed” by Libbie Hawker.

Overview: “Is Ahmose’s divine gift a blessing or a curse?
The second daughter of the Pharaoh, Ahmose has always dreamed of a quiet life as a priestess, serving Egypt’s gods, ministering to the people of the Two Lands. But when the Pharaoh dies without an heir, she is given instead as Great Royal Wife to the new king – a soldier of common birth. For Ahmose is god-chosen, gifted with the ability to read dreams, and it is her connection to the gods which ensures the new Pharaoh his right to rule.

Ahmose’s elder sister Mutnofret has been raised to expect the privileged station of Great Royal Wife; her rage at being displaced cannot be soothed. As Ahmose fights the currents of Egypt’s politics and Mutnofret’s vengeful anger, her youth and inexperience carry her beyond her depth and into the realm of sacrilege.

To right her wrongs and save Egypt from the gods’ wrath, Ahmose must face her most visceral fear: bearing an heir. But the gods of Egypt are exacting, and even her sacrifice may not be enough to restore the Two Lands to safety.

The Sekhmet Bed is the first volume of Libbie Hawker’s series The She-King, a family saga of the Thutmosides, one of ancient Egypt’s most fascinating royal families.” –from Barnes and Noble site